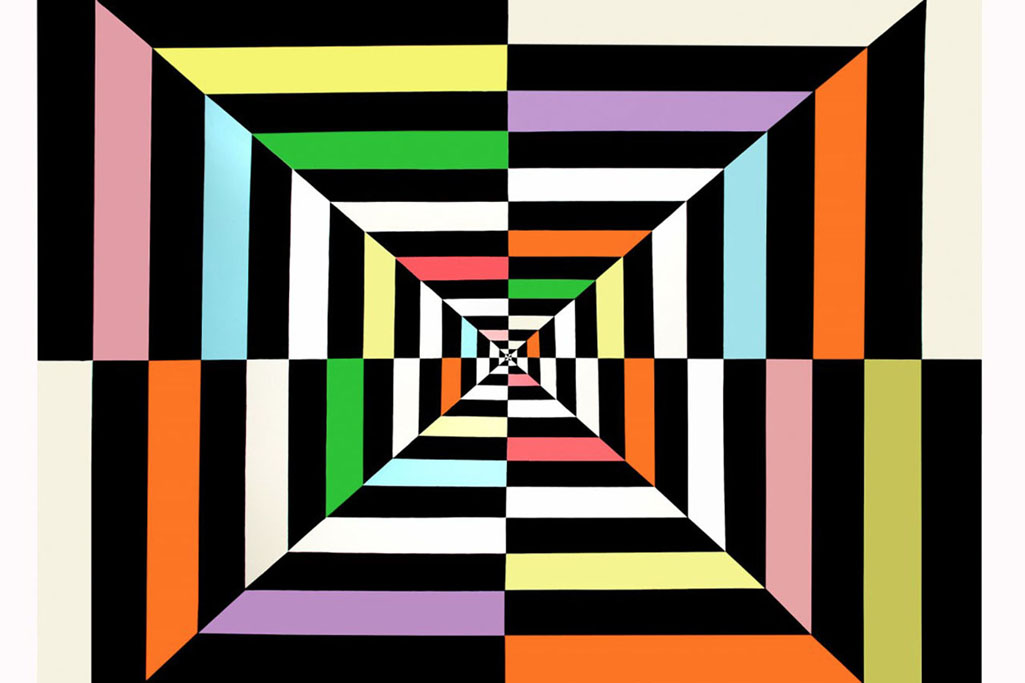 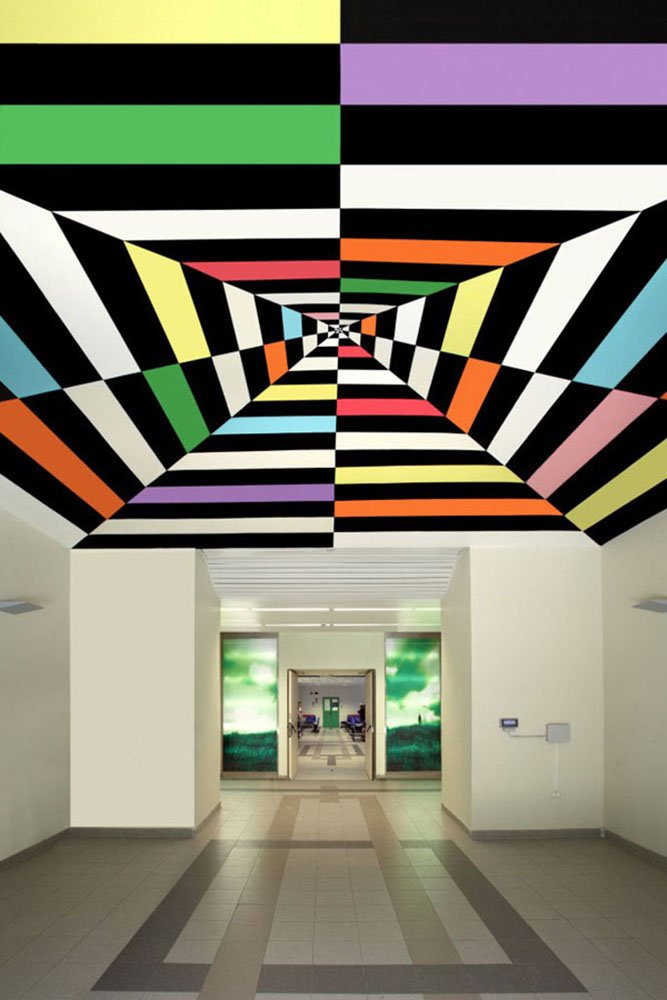 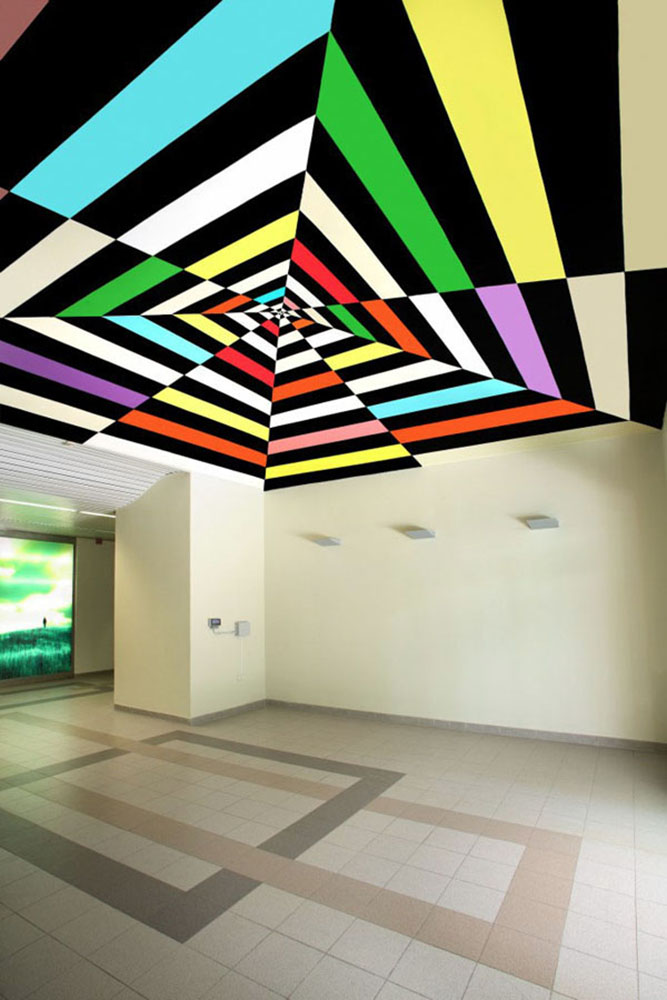 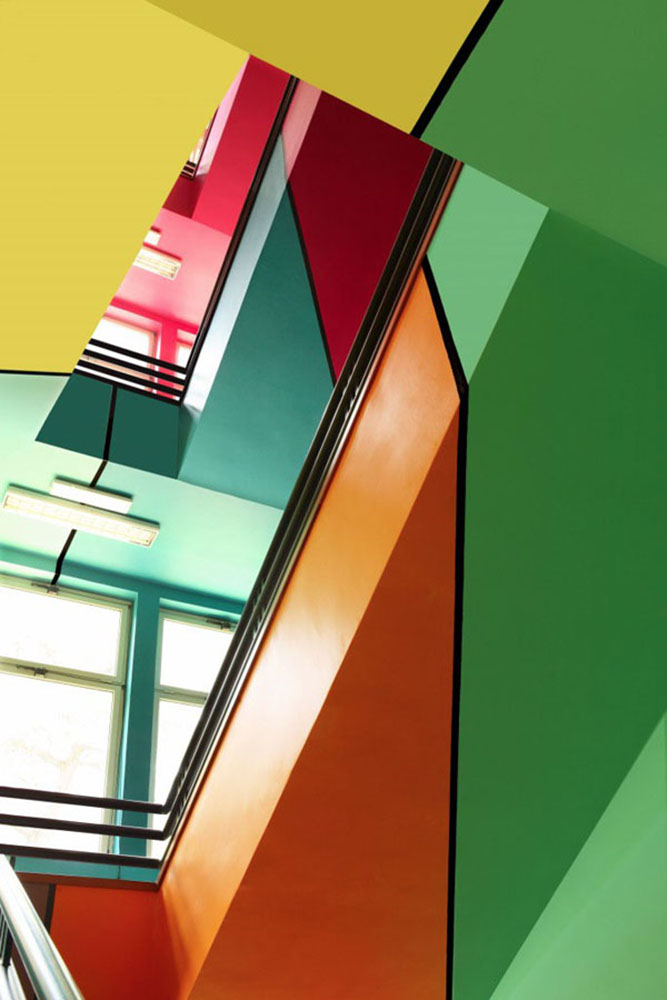 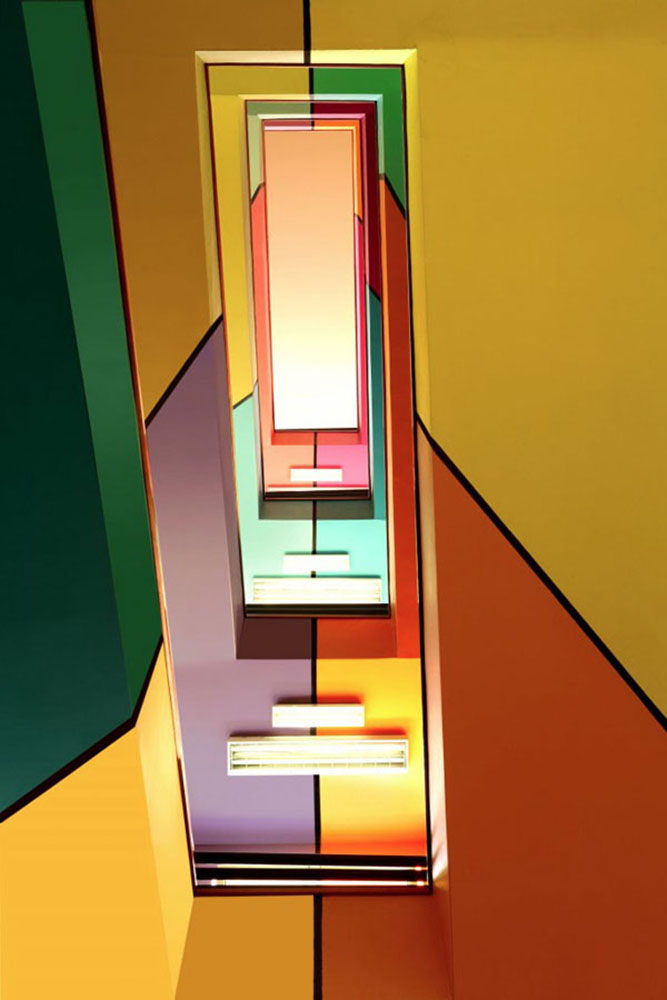 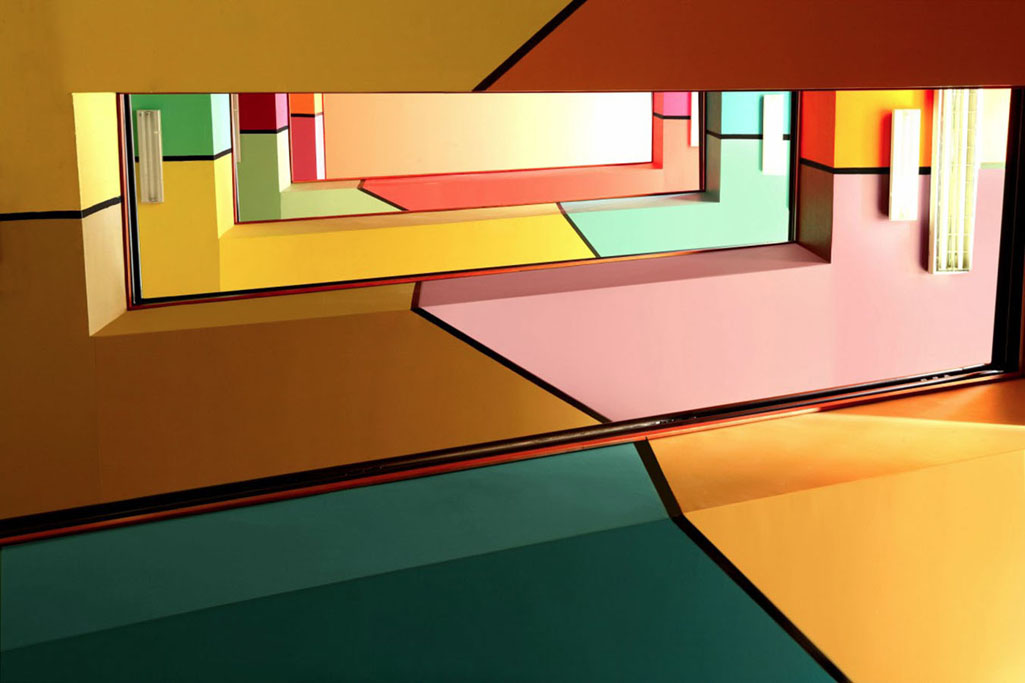 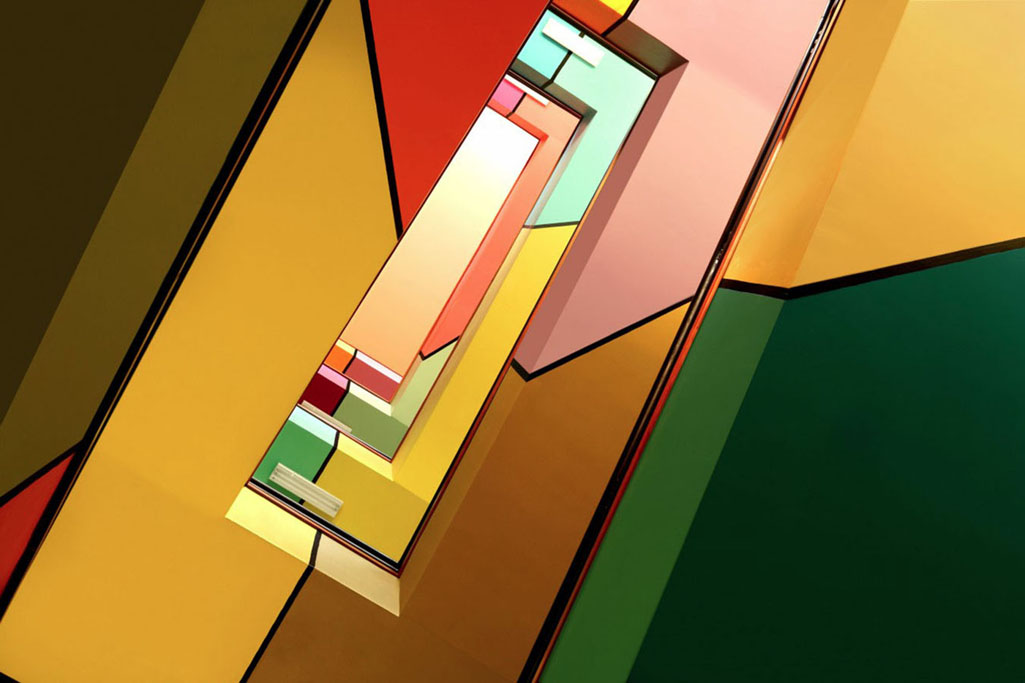 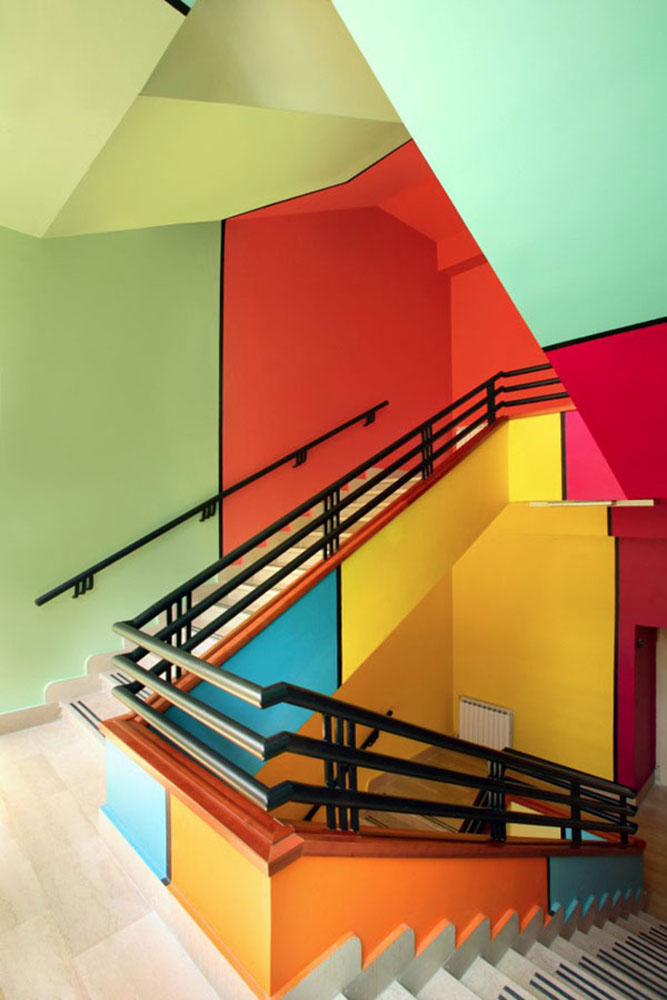 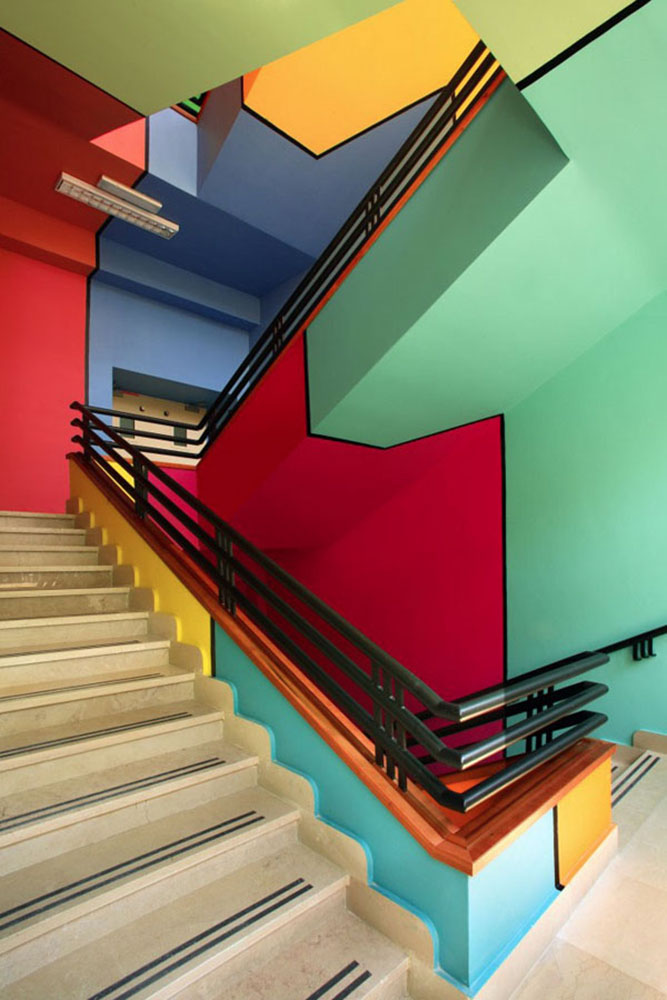 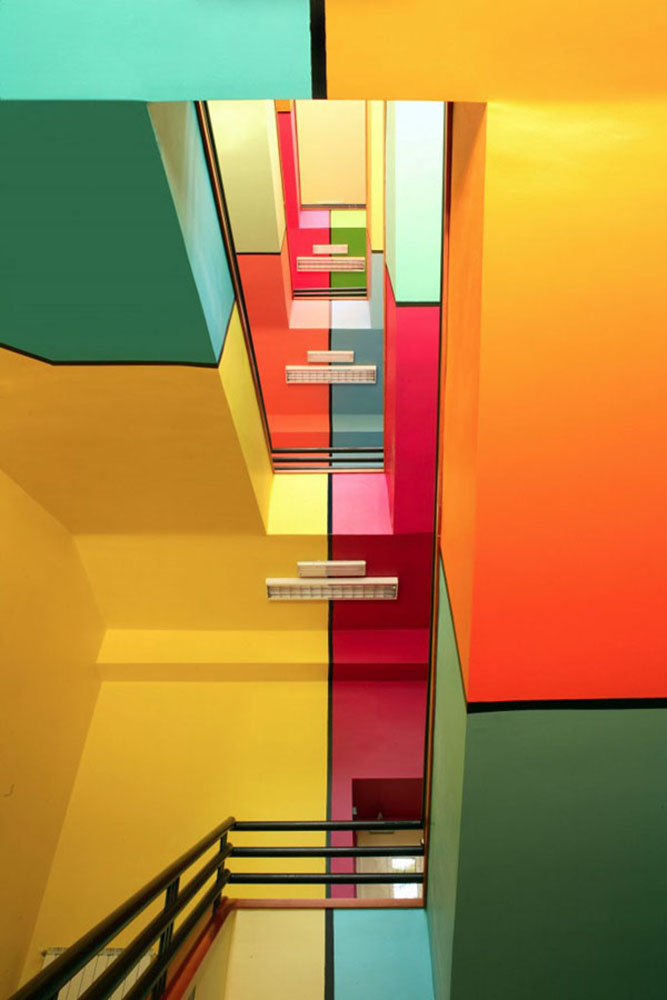 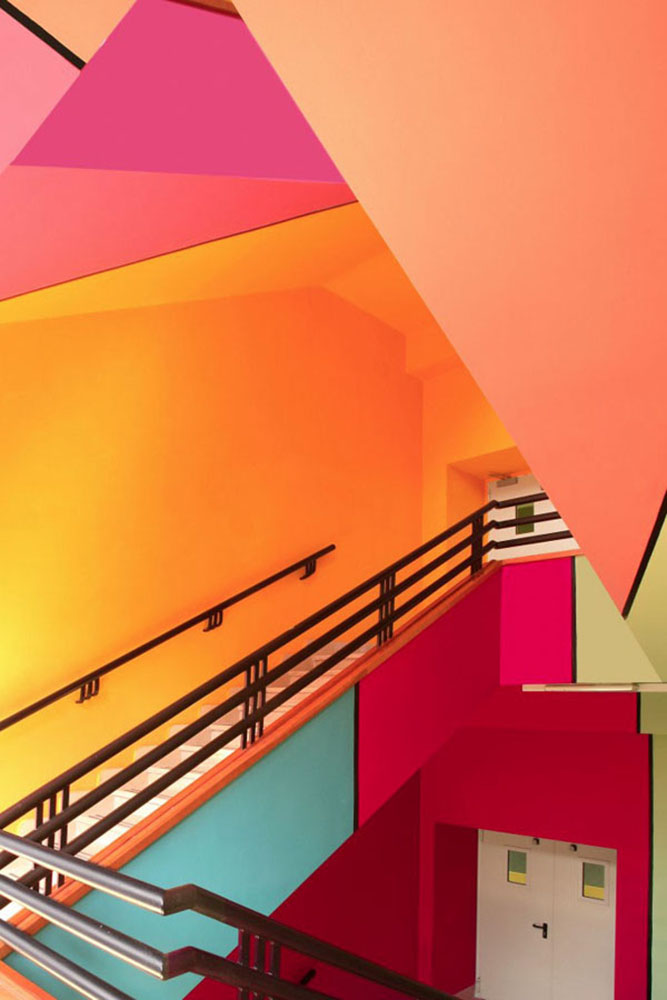 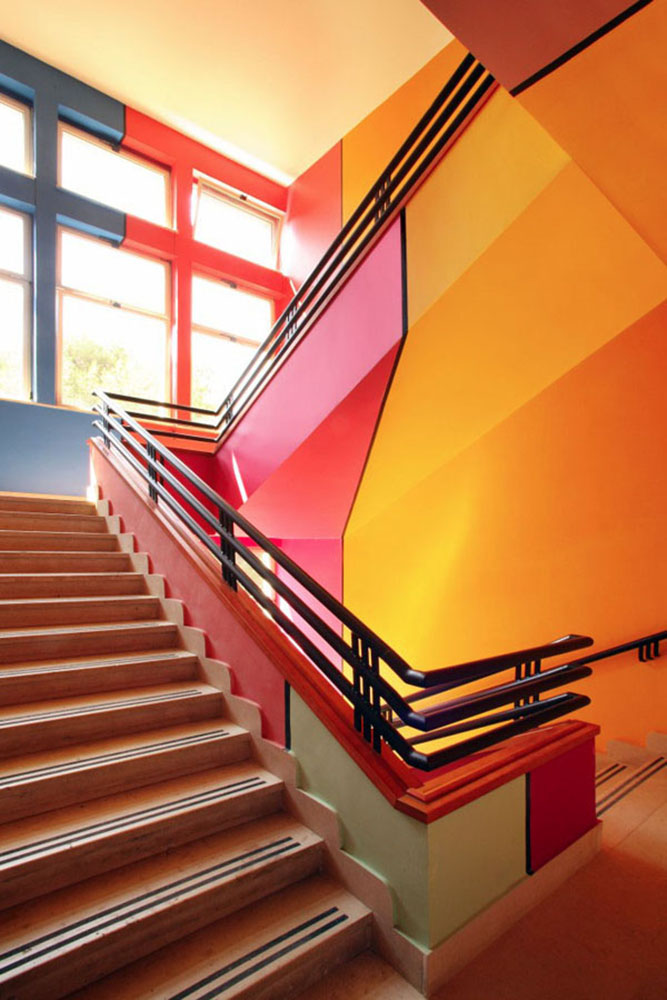 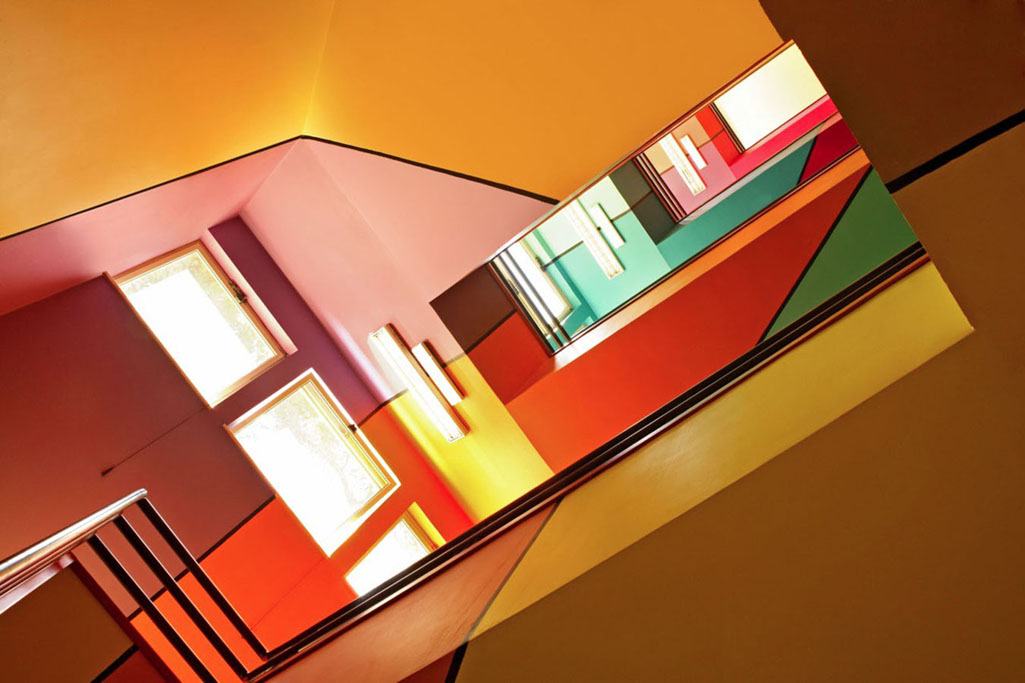 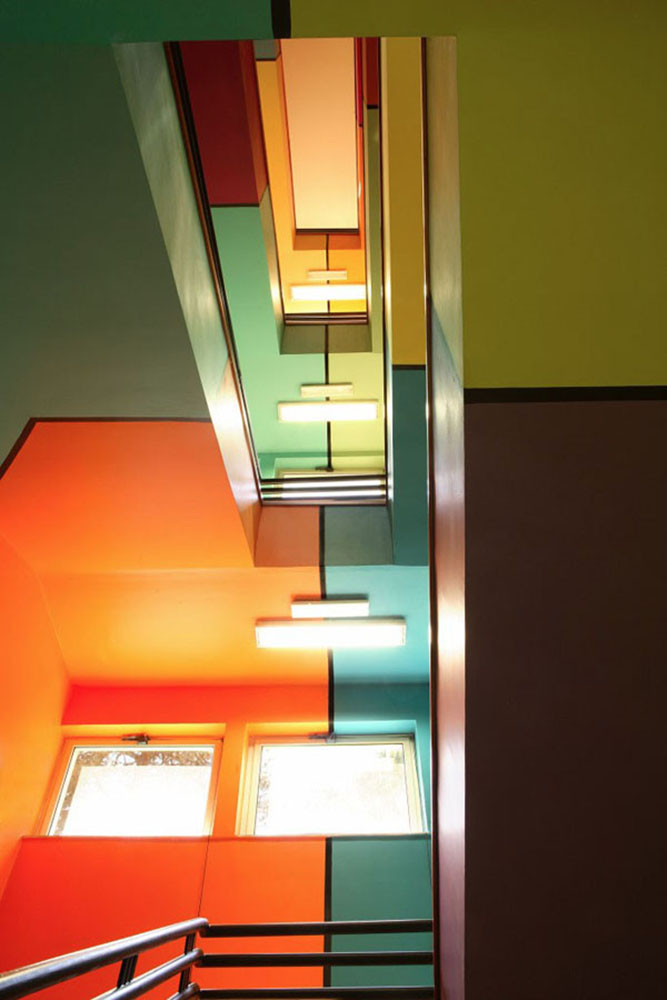 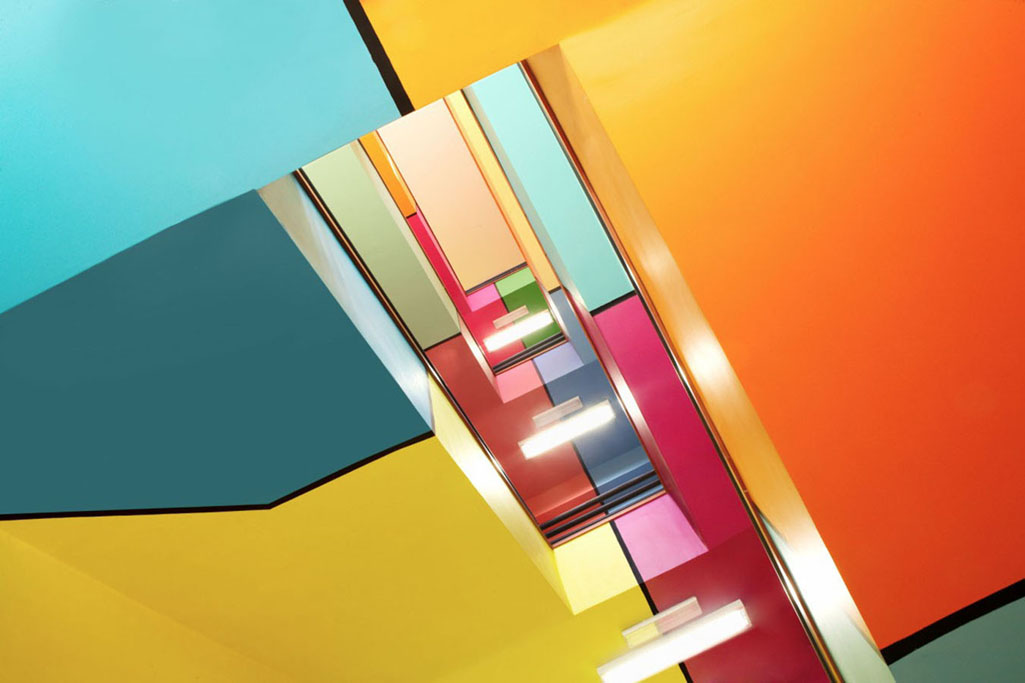 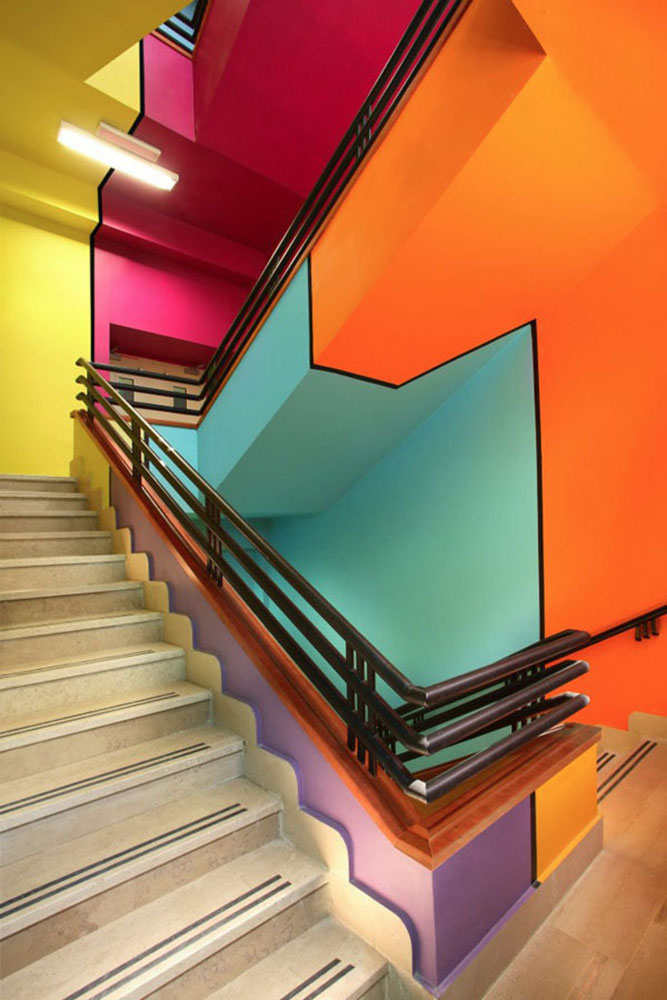 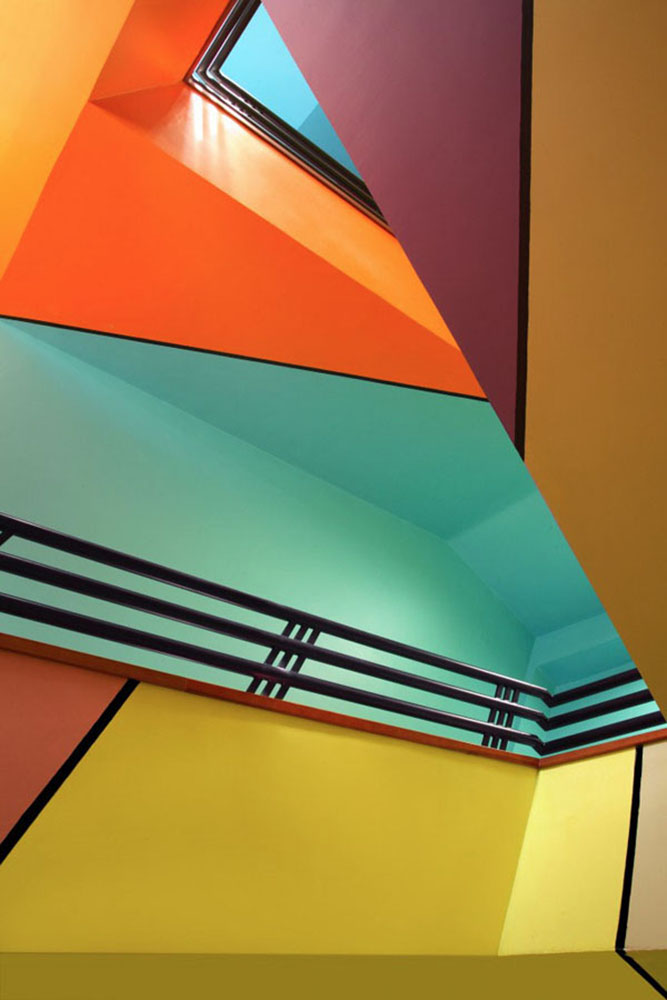 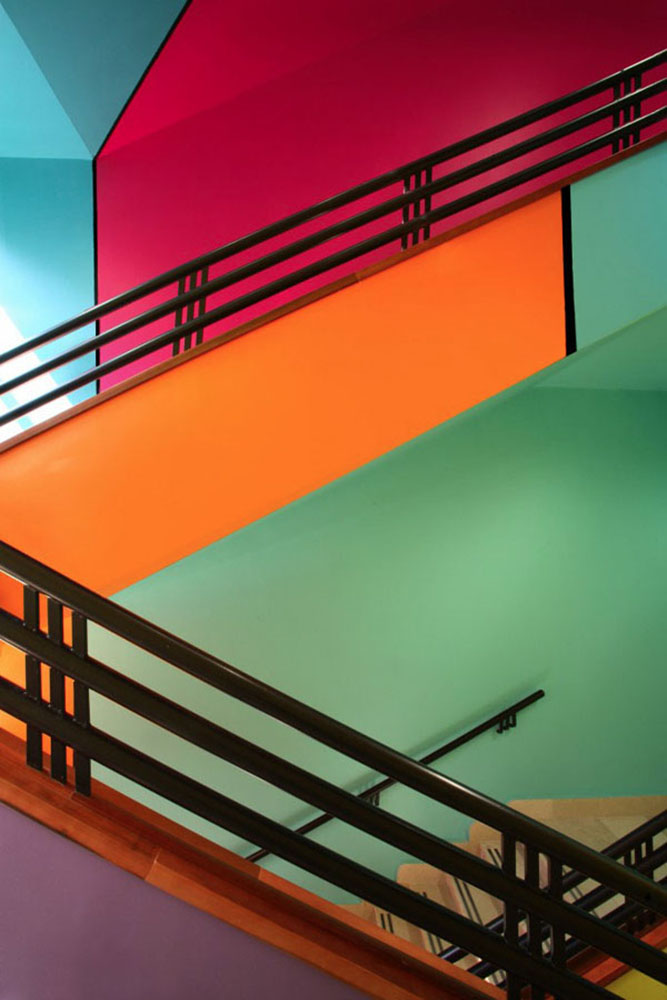 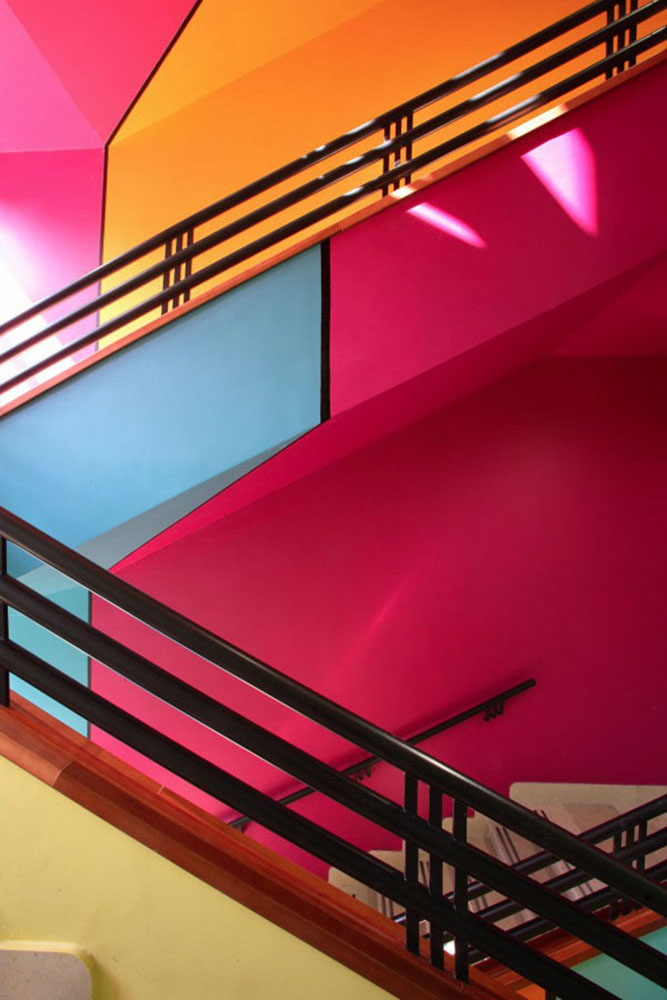 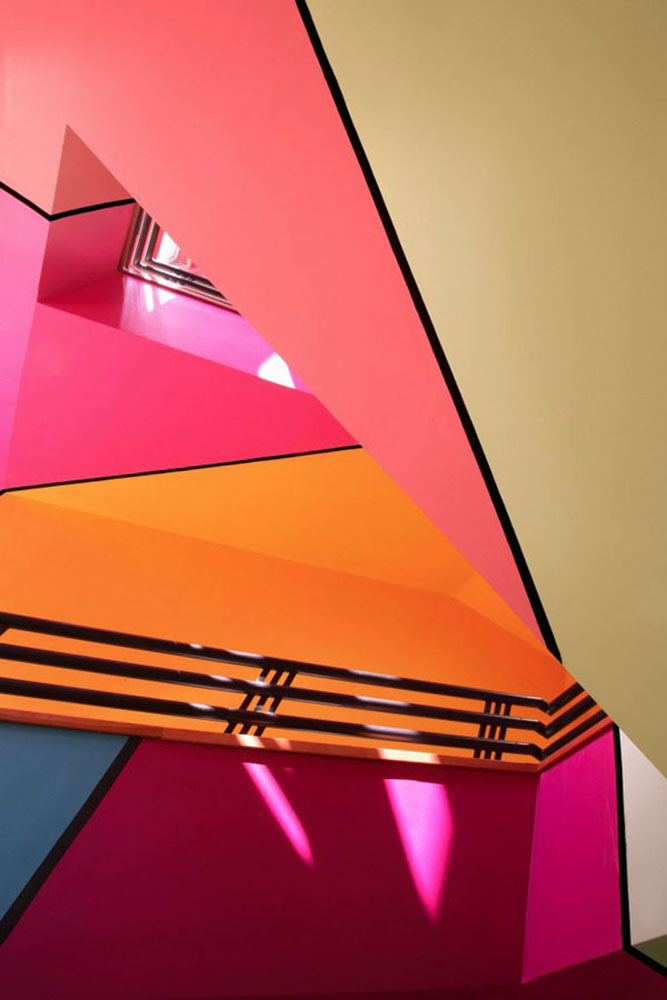 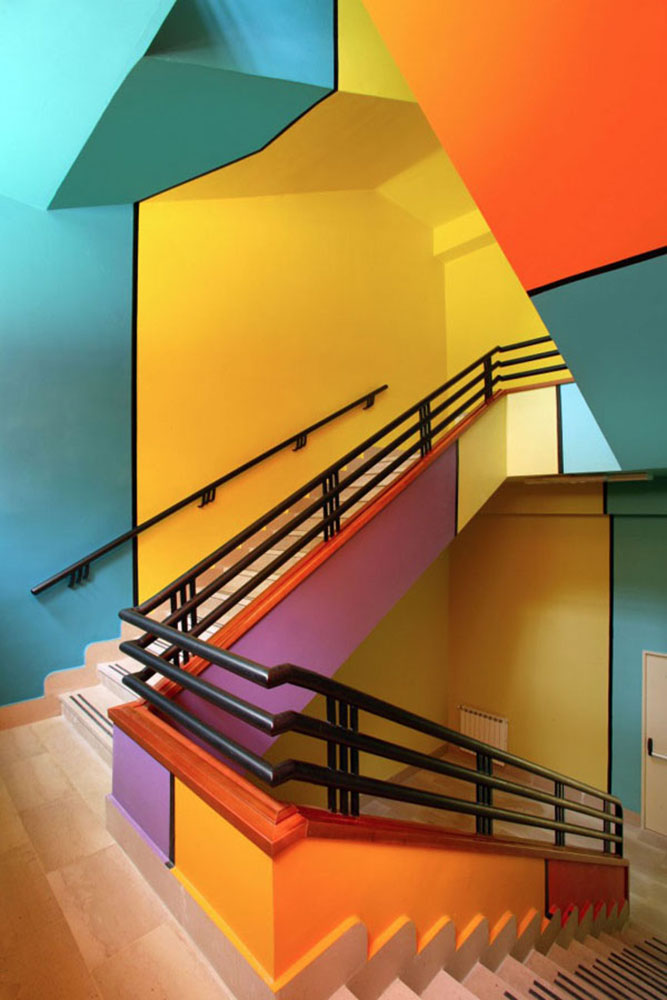 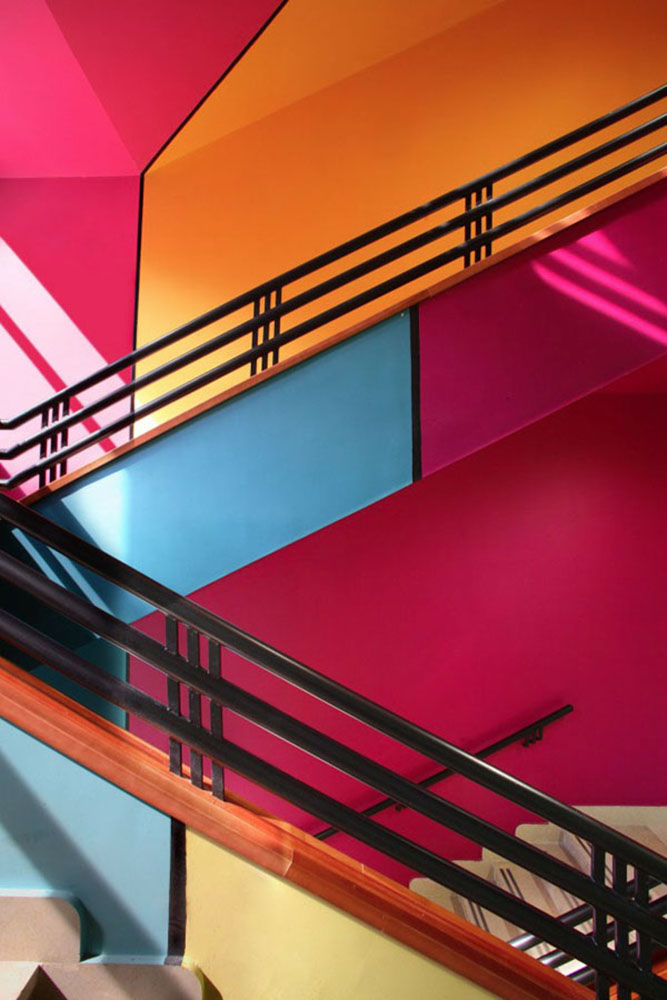 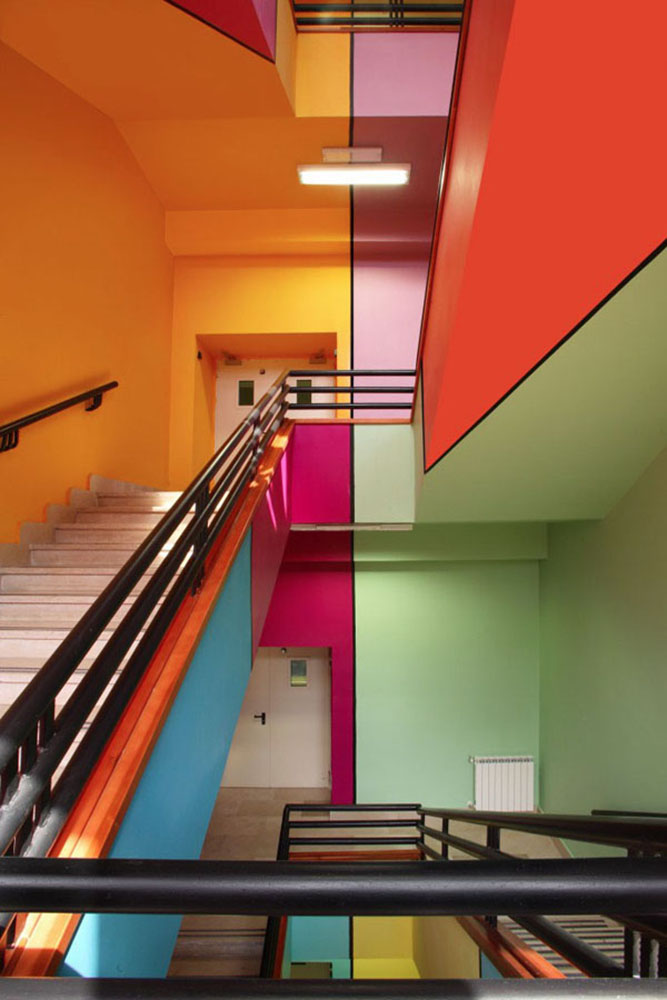 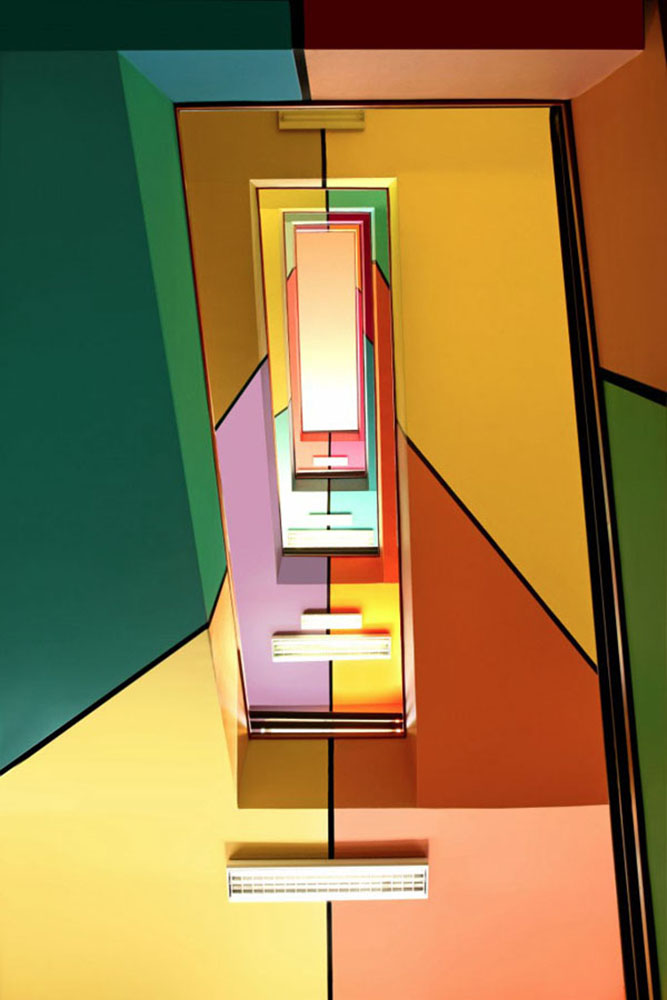 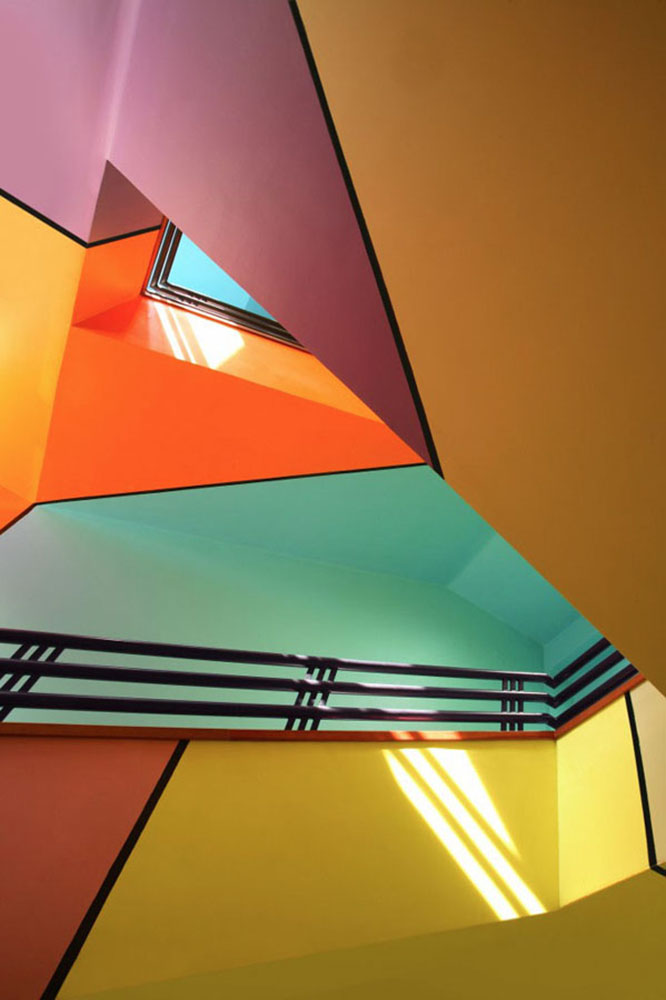 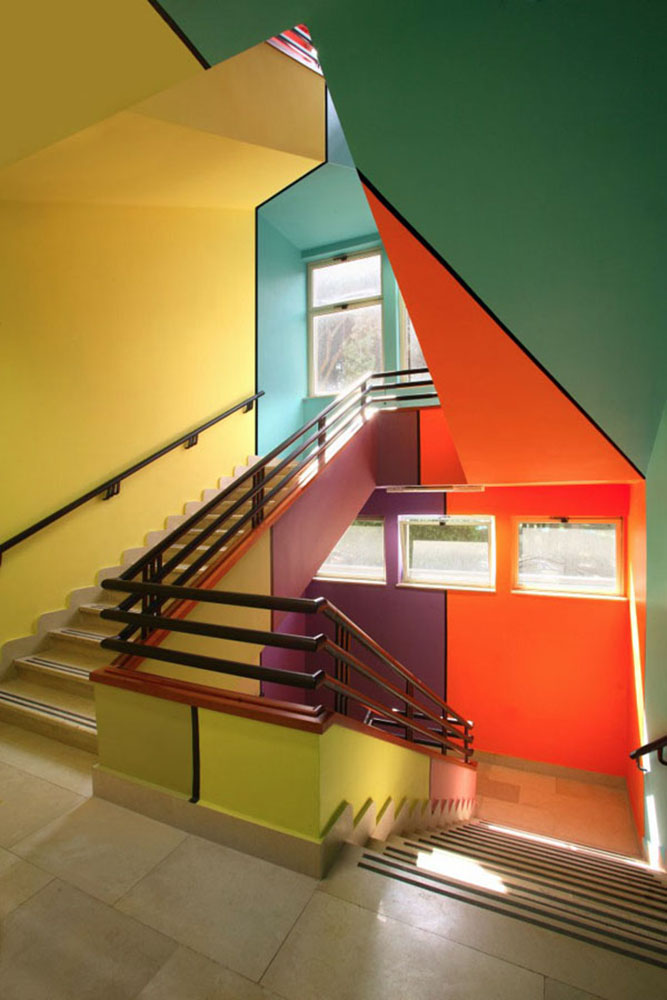 A journey within, a fantastic sculpture, a kaleidoscope of life.

Researches carried out in the field of hospital planning and on the effects that the environment has on the working staff and the patients have shown how the habitat has a considerable impact on the efficiency of both given and received treatments and care.

This way the environment,as long as well kept buildings, raise the moral of the operators and improve the public’s perception of the organization.

Furthermore, the artistic interventions may have an intermediation effect between individuals and institutions, by helping the staff raising their awareness of their surrounding environment and creating a more comfortable and less punitive habitat for the patient.

Since the first survey on the building yard (being it a restoration project there was the advantage to be able to see the “skeleton” of the existing building without working only on paper!),Mariangela Levita has shown a great interest for the space, for the volumes that were involved, and for the pre-existing architecture.

This interest and the peculiarity to intervene on a hospital building, a place strongly characterized by its distinguished users, have become - during the subsequent surveys and the debates following them – a desire for a more global intervention compared to the initial proposal that related to the entrance ceiling only.

Levita has modified the intervention on the ceiling itself, foreseeing a pyramidal shape of it that confers a sculptural-architectonical dimension to the pictorial intervention.

Wanting to intervene in a sculptural way over the existing architecture raised the input for the staircase project: a bidimensional intervention, of painting only, that raises to a sculpture level through the rifts and the cuts determined by the changing colour, underlined by the black tracing that seems to tear the existing architecture, -yet creating a perfect interaction with it,- returning it back to us enriched by a new interlacing of lines.

Lines that determine symmetries when they cut in half the landings, and asymmetries when they cut with diagonals or angles (this is what differentiate the interventions between the two staircases) the climbing ceilings, which from a limit become an active, pulsating space: if viewed more than one at the time from below, the sign reminds of the cardiac pulse diagram. From here the strongest element of the project: the rhythm, the beat, the repetition, the vibration of the visual elements transferred on to the architectonic surfaces.

A result that is enhanced by the photographic interpretation of Luciano Romano and that flows into the audio visual rhythm of the video realized by Mariangela Levita with the music of Pietro Lahara. A sculpture made of painting then, not conceived to be admired from the outside but to be walked through its inside as wanting to create a path of protection, light and colours,those elements that one lacks and misses the most when finding himself,because compelled, to attend these places.

The double light box realized by Bianco - Valente draws from similar argumentations, with the inclusion of imaginary windows open on a fantastic landscape: through its green colours extended to everything that is present in the image, it conveys an immediate sense of tranquility and participates to the volumetrical placing.

The title of Levita’s work (“A suspended view”) hides the will of the artist to provoke a liberating abstraction as much as it is suspensive compared to the contingency, which can become unbearable in these places of suffering: a contribution of lightness then for those that have to fight against the hardest aspects of life.

A lightness that takes shape by an unfolding of the architecture and that paradoxically makes it more deceiving. The sacral form of the fresco, to which previous centuries’ architecture have made us accustomed to, is this way recovered, updated and twisted, rescuing the ability of Art to meaningfully influence our ways to perceive. In particular, the new paradoxical balance that generates among the geometric signs which divide the colour partitions and the architectural lines that contains them, leaves us a bit bewildered.

But it is this bewilderment that allows our mind to fantasize of a world where parallel lines meet and everything becomes possible. The crossing becomes a sensorial path that unifies bidimensional and tridimensional, rational and irrational, returning back to us a kaleidoscopic vision of reality that corresponds to life.